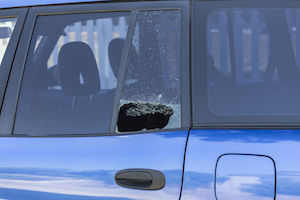 Vehicle burglary in Claremore, Oklahoma is a felony charge. And felonies have significant ramifications if you are convicted.

Oklahoma categorizes burglary as either of the first, second, or third degree, with burglary in the first degree as the most serious crime of the three. However, all burglary, including vehicle burglary in Claremore, is a felony.

First-degree burglary in Oklahoma is legally defined as:

Burglary in the third degree is legally defined as:

Vehicle burglary in Claremore, like other types of third-degree burglary, is punishable by up to five years in prison. Okla. Stat. tit. 21 § 1436

Think of a person breaking a car window to grab something inside or to commit another type of felony inside the car.

While the burglary of a vehicle is most often associated with theft, it can involve other felonies such as stealing the car itself. But it can also include using a stolen or false key to enter a car without permission with the intent to steal or commit another felony inside. It is the lack of permission to enter that drives the element of breaking and entering.

Vehicle burglary in Claremore is a crime of intent. The prosecution will have to prove that you broke into the vehicle and entered it with the intent to steal something inside or commit another felony. Thus, if you were caught with the vehicle owner’s cell phone that was left inside his or her vehicle, the prosecution may well be able to prove intent.

But if there is nothing inside the vehicle and you just wanted to get into the car to get out of the cold, there is probably no provable intent. In this instance, the district attorney may charge you with breaking and entering or unlawful trespass.

Intent crimes can be difficult to prove. Hence, defenses are available to you.

Felony burglary carries significant jail time as a punishment. If charged, you want to make sure that you hire an experienced Claremore criminal defense attorney to represent you.

Freedom is precious. Don’t try to go this one alone. Get the help you need.

Claremore Lawyer is here to help you. Don’t delay. Call us today.

And your initial consultation with a Claremore criminal defense attorney is free. Call us at 918-213-0950.

If you prefer written correspondence, submit your question using the form at the top right of this page.